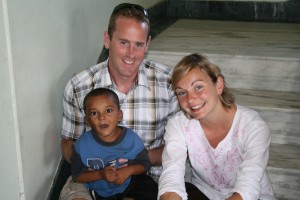 The Founders of Wind of Change International share a passion for humanitarian work. They also share a life, marriage and three beautiful boys in Melbourne, Australia.

Tuuli comes from Helsinki, Finland. She has completed two Master’s degrees; an undergraduate Master of Arts (Sociology & Business Management) from University of Glasgow, UK, and a Master of Social Science (International Development) from RMIT, Australia.

In 2005, Tuuli worked in a primary school in India for disadvantaged children living in the slums of Bangalore. The realisation of the unjust world together with her personal experiences of growing up in a girls’ home in Helsinki developed a strong will to help those less fortunate. From this passion Onni Children’s House was born. Through studies, work and travel, but nowadays also as a mother, Tuuli strives for making a difference to those whom it matters the most.

Carl is from Melbourne, Australia. He has completed a Bachelor of Commerce and is a qualified accountant and financial adviser. After a career as an AFL footballer with Geelong and Collingwood, Carl developed a passion for development work during a stint in India working on projects with tribal communities in Orissa. He continued on to working as the Chief Operating Officer of International NGO SurfAid International, where he was responsible for finances across the four international offices as well as implementing a new project management system to improve project performance and accountability across the organisation. Currently Carl runs his own financial advice practice in Melbourne and Geelong.